As Steve pointed out, we’re back from the Maker Faire. The Faire was another great success, with the centre for life estimating 3000 visitors to the event. Not to mention all the makers and crew that were manning the place the whole weekend without whom the show would be nothing. It was great to be able to meet up with other groups and makers and forge some better links between us and them.

Despite my best efforts there was still quite a lot of work left to do on the spider. Having the extra pairs of hands around on Friday meant that we managed to get it all assembled with a little time left over to head to the pub for the first of the nights out. The socialising was definitely one of the highlights. Evening chats were unashamedly geeky, with regular appearances of phones, laptops and electronics.

Meeting the public and explaining all of the projects was quite fun. The better conversations will always be with other makers who ask the more relevant questions but the whole point of being there is to explain stuff to all levels. The crafty aspects of the group seemed to be much more appealing than the technical aspects, probably because of the lower entry requirements. It’s fairly easy to understand how 30000 rings become a suit of chain, but electricity still confounds people.

This year because we were a hackerspace instead of individuals I think we were taken a little more seriously. I managed to blag the group a license for Cambam and a potential discount on a 3D printer from bodge it quick.

Steve and I discussed several ideas on the way back. I think it would be nice to see all the hacker spaces put together next year. Each group should still get their own space to demonstrate their projects, but they should all be next to each other. Also it would be a really good idea to get one stall up to explain to the public what Hacker spaces are and present a map showing where each of the exhibiting hacker spaces are located. If each group puts just 2 hours into manning this stall it shouldn’t be too much effort on any one group. Stay tuned as the the other ideas will be surfacing shortly.

Nobody’s sure if the hashtag for this year was deliberately chosen to sound slightly rude or not, but Twitter has certainly been busy over the weekend. Maker Faire 2011 was the busiest event at the Centre of Life ever, although this doesn’t totally guarantee the location will be the same for next year.

We arrived on Friday and started building. And building. And building! At 7pm we finally finished the cardboard spider, which should be visible in the site’s new sidebar to the right. It is huge. A significant number of people visited our stand before spotting the spider, as they didn’t look high enough. From the second floor it looked pretty good. The Centre for Life technicians were very helpful and put a spotlight on it directly and added a green gel, which I think really improved it.

Nestling by the front left leg was the racetrack. This project was unfortunately more of a qualified success. We did get a TV and the the car could be driven around the track via wiimote. After a bit of feedback, the control was changed to use MarioKart-style tilt steering and buttons for forward/back, which participants found slightly easier. However despite having two batteries, the car spent most of Saturday waiting for a battery to charge, and many children (and some adults) had to be told to come back later. On Sunday this worsened when one of the battery packs gave up overnight (undervoltage is permanent on Team Losi batteries). The backup pack simultaneously also deteriorated to the point where the car could not be driven long enough to complete a lap, and reluctantly we closed the exhibit.

It still generated some interest from the public, in terms of the use of cardboard (as did the spider), and just leaving the camera on kept a lot of children entertained. However it required no maintenance whatsoever, which turns out to be useful as talking to the public is surprisingly tiring as everyone present concurred. Martin’s Etch-A-Sketch had no problems in this regard and children could use it unattended for the whole weekend.

Tree’s chainmail was incredibly popular, although unfortunately there aren’t any pictures of it to show, but it was good to meet our honourary member in Newcastle. Having someone so tall was also useful when lifting the spider body off the ground. It looks very impressive, and it’s gratifying to still be using the present tense, as the Centre for Life have kept it, hopefully to use in an exhibition this week, titled Spiders On Drugs part of a rather more titillating event. Fingers crossed!

Finally, and most importantly, we had a chance to meet makers from around the country and beyond. The London and Nottingham guys are a little closer to home, and were very friendly, even when drunk. We’re going to definitely do more events with them this year.

For those at the Maker Faire who wanted to build their own paper spiders, here are the plans.  The ones at the show were printed on A4, but you can print at whatever size you like.  We’re sorry we didn’t have any to hand out, the post failed us

2x small spiders PDF format, should be fine printed as A4

Small paper model of the larger spider, PDF format, can be done on A4 but A3 would be easier to assemble

If you have any questions or problems then feel free to email me msraynsford@gmail.com

I spent another interesting weekend assembling the spider framework. It was quite the challenge because it is extremely large and trying to do it on my own our back garden just adds to the fun of it all. It went well and despite a wet day on Sunday I managed to get something up and standing on my Monday off (yay for valentines day). It is mostly solid but it has an alarming amount of twist around the vertical. I’ve tried to reduce this with some cross braces from the fist joint back to the body and I’ll need to assemble it again to see if it works. While it’s up I’d like to add the cardboard cladding to the body to see how that is going to work too. But I’m going to need a hand or two.

I’ll be taking the spider over to NSME on Sunday 20th Feb at 1pm and will be assembling it there and hopefully getting it to look a little bit like the final spider we want. If you’re in the area please drop by and lend a hand it would be most appreciated, there is plenties of screwing, measuring and cutting to be done (in cardboard and wood) so lots to keep people occupied, plus you’ll have the satisfaction of helping this project actually get to maker faire. 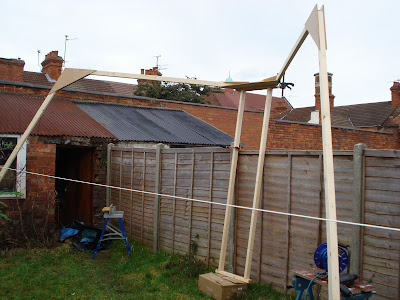 After discussions with the Maker Faire people last week it appears it’s going to be a bit tricky to take the whole spider along to Newcastle. We can erect it outside the stadium but we need to be able to prove that it isn’t going to blow away which is apparently a little more than just looking at the vast weights in the feet and saying ‘That looks heavy enough’. So we struck a compromise deal which suits us pretty nicely. We’ll only take the front half of the spider and we’ll prop it up against a wall inside the venue. then we can set up stall underneath it. Suits us in many ways because the front half is already made and it will be easier to transport.

I realise it’s not overly worthy of an update post but I spent 20 minutes this afternoon doing a quick framework test. I screwed some of the longer pieces together to test my plans for the joint. It’s pretty strong but would benefit from a matching plank on the other side of the joint, so I shall head back to Wickes tomorrow to buy the rest of the wood and something suitable for the job. Hopefully I’ll have more to show by the other end of the weekend.